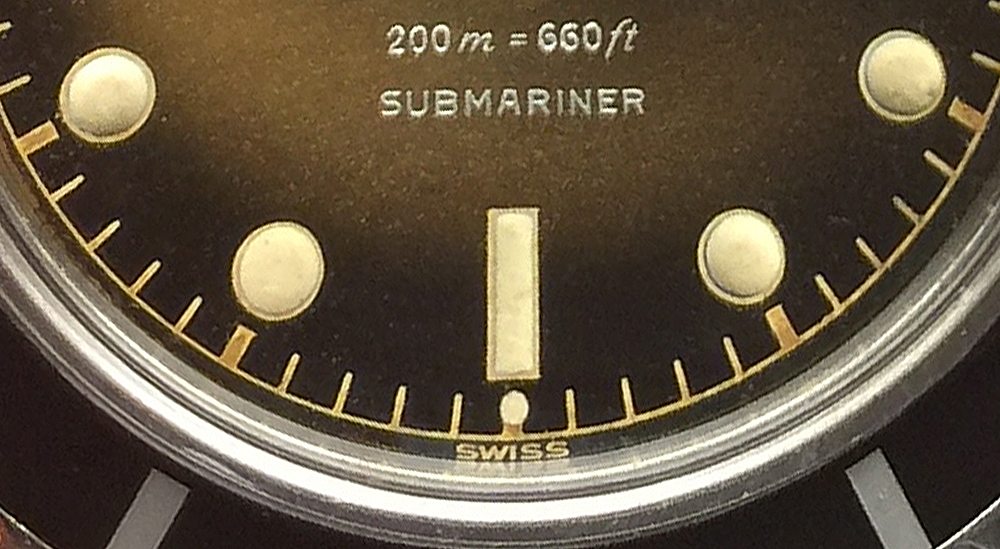 Update from initial 2010 report. Above a 1962 Ref 5512 with pointed crown guards & at the same time Rolex was still selling the 5508 without crown guards below. Notice the little dot above SWISS at 6 o’clock? Thats what we call the exclamation mark… I’ve wondered for quite some while what the use of exclamation mark by Rolex was. We see the little dot at 6 o’clock in around 1962 but what was it saying?? Someone once said that underline=exclamation mark but from all kinds of measurements we can conclude that the exclamation dials where much higher (5-10 times) by radiation then the later underlines, that where having already the Swiss T<25 standard of luminous. So the uestion remains unsolved to me but then this morning i was looking back to the earlier AEC post, that already made me think about the possible lume evolution, and noticed that the research done by some italian friends show a exclamation mark first observation with it’s radiation… The exclamation mark is the first official sign used by Rolex on “swiss” radium dialprints to show that the radiation has been adapted to new Atomic Energy Commission regulations from end 50-ies beginning 60-ids. We see a exclamation mark from 1962! It confirms me that Rolex was using a less agressive lume from ’59-’60 upwards than they did when first sportmodels where introduced in ’53-54. That means as we learn from the Rolex add below that no other sportmodels that had to be tested by AEC in 1960, their radiation warning level was NOT at 0,25 Msv in 1960 but most probably around 1,00 – 1.50 Msv!! The advertisement from Rolex shown by Oscar above that only the bakeliet on 6542 was a problem with AEC but we see, after intensive geiger measuring, that dials around ’60 when this occurred where having a much higher radiation then later ’63-’64 models when Swiss T<25 ( 0.25Msv) got the new international standard… So my logic now says that the “exclamation mark” was the first addition / official sign on a Rolex on “swiss” radium dials to show that the radiation has been adapted to new Atomic Energy Commission regulations from 1960. So yes, the purpose of the exclamation mark is also as the later underline ( 1963-1964) added on top of the dial with a little line, showing that ‘old stock’ dial had first been updated to new rules. Most probably this has only been done to rolex with radius dials and hands that where sold to the U.S. and Canada. From end 50-ies by AEC norm it looks like the ! mark was Rolex first officially sign on the dial, small but visible lumed dot added on top of the dial at 6 o’clock. We see this only in around 1962…The following next 2 years ’63 &’64 with underline, white swiss and later double swiss to newest international standard, Swiss T<25 sign of maximum of 25 millicuries of tritium per timepiece… Here the ref 5508 Submariner from 1962, one of the last small crowns ever made, with exclamation dial. By the way…we see the colour of the lume change to a more lighter tone, more towards cream/greenish then yellow/orange we see on radium.. from a older post of Fatboyharris; www.network54.com —-> It’s a accurate sum up not taking the ‘exclamation mark & underline’ period ( post is from 2007!!) on old stock dials into account but further very clear in it’s content… “Timepieces using up to 25 mCi of tritium for illumination have been distributed for use in the US by the general public since the 1961 amendment to Part 30 of the 1954 US Atomic Energy Act which allows the possession, use, and transfer of such timepieces without a license. Prior to that date all watches in the US had to be distributed under licence. It appears that watch distributors in the US, traditionally the biggest market, were taking advantage of exemption from licensing post 1961 amendment to distribute their timepieces. The International standard still remains at up to 27mCi but all dials (where annotated) have been marked less than 25 mCi to conform with the lower US standard for exemption from licensing. It is generally understood that, Rolex began to mark dials with “T < 25” in 1962 for the North American market and a bit later for the rest of the world following an International Treaty for the Control of Radioactive Materials , including watches in Rome in 1963. The regulations set forth by the Nuclear Regulatory Commission (NRC) in 10 CFR 30.15 state that an individual does not need a license to possess timepieces if the following specifications are not exceeded:

Rolex ceased to use tritium in 1998 and the rest is history. Althought this chronicals the introduction of tritium it is felt that radium was already being phased out on some of the late 50’s sports watches following the GMT radioactive scare.” If you want to know more about Rolex luminous, please read also my report of “The Evolution of Rolex Luminous” here on RPR